The first leg of this trip is to Berlin, which I want to reach before my birthday on 1 November, and it all looked very well in the beginning. The speed was a bit slow but I compensated that by taking the ferry from Trelleborg to Sassnitz instead of going through Denmark.

Other problems were becoming increasingly annoying, though. First of all the 400 Wh bike battery is not enough with this heavy load. Second, when charging it with the charging battery it was drained. And once drained I could never fill it up again.

The solar system just does not do. At least not in northern Europe at this time of the year. Not if the weather is as shite as it has been, at least. I haven't seen the sun in a week!

So, the conclusion of this first leg is to not depend on solar energy at this time of the year this far north, not if the anount of solar panels is limited, at least.

There is no point continuing but I will now take the train to Berlin. I will simply use other eco-friendly tools to make up for the time I've lost. Hopefully the system will prove to be adequate further south. 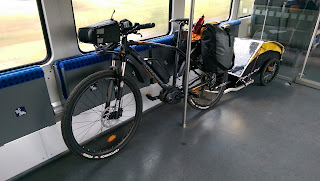 Email ThisBlogThis!Share to TwitterShare to FacebookShare to Pinterest
Labels: Equipment, Planning, The trip